ON THE BLUE COMET 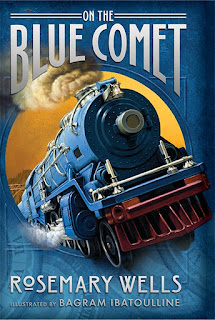 ON THE BLUE COMET, by Rosemary Wells, ill. by Bagram Ibatoulline (Candlewick 2010)(ages 8-12).  In this young middle grade novel, eleven year old Oscar lives with his father in a small house in Cairo, Illinois.  There, they've created a world of their own: ten Lionel trains, including the Blue Comet.

It all comes crashing down, though, two years into the Great Depression, when the bank takes the house and the trains, too.  Now, Oscar must move in with his aunt and cousin while his father seeks work out in California.

On Christmas Eve, the trains are on display in the bank's lobby.  When bank robbers appear, the mysterious night watchman urges Oscar to flee by "jumping."  He does so, first into the train set and then ten years into the future...

ON THE BLUE COMET offers a fanciful and enjoyable time travel yarn featuring cameos from famous actors and politicians and bankers of the era.  Full color illustrations add richness to the depiction of the times.
Posted by Greg Leitich Smith at 11:13 AM