BLIZZARD OF GLASS: THE HALIFAX EXPLOSION OF 1917 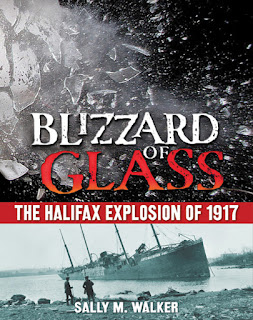 BLIZZARD OF GLASS: THE HALIFAX EXPLOSION OF 1917, by Sally M. Walker (Henry Holt 2011)(ages 10+).  In December 1917, the Belgian relief vessel Imo collided with the munitions carrier Mont-Blanc in Halifax Harbor.  The resulting blast has been called the largest man-made explosion before the invention of the atomic bomb.  Two towns were flattened and nearly 2000 people were killed.  And the day after the accident, a blizzard dumped a foot of snow on the devastated area...

BLIZZARD OF GLASS offers a thorough and compelling look at a little-known disaster, with interviews of survivors and hair-raising accounts of the event and its aftermath.  Altogether, it's a gripping tale of horror, survival, and hope.
Posted by Greg Leitich Smith at 6:38 AM

Thanks, Greg, for sharing this book and for helping to make more people aware of the Halifax disaster. It's an important part of Canadian history, and I'm grateful that this book will make it more well-known. People went through so much, at a time when the world was in turmoil.

Thanks! I had heard of it, but only sort of vaguely and in the context of the Boston Christmas tree. The book really brought it home.