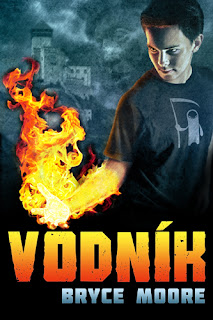 VODNIK, by Bryce Moore (Tu Books/Lee & Low, March 2012)(12+).   When Tomas was six, his parents brought him to the United States after he was nearly drowned and burned to death -- and he has the scars on his arm and lungs to prove it.   Now sixteen, after their house in the States burned down, Tomas and his family are back in Trencin, Slovakia, and he has a job at the very castle at which he nearly died.

Then he starts seeing things -- fire elementals, water creatures, and the Grim Reaper -- and starts to think that the legendary vodnik may actually be after him and his soul...

VODNIK offers a thrilling and suspenseful update on Slovak legends of the vodnici.  Tomas is engaging and the setting atmospheric, without being cliched, blending the ancient and the contemporary in a fascinating and sometimes funny read.
Posted by Greg Leitich Smith at 9:32 AM