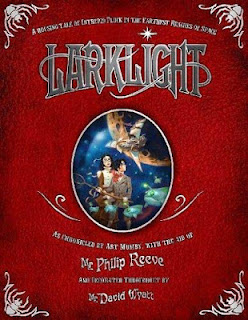 LARKLIGHT, by Philip Reeve (Bloomsbury 2006)(ages 8+).  In this steampunkish space fantasy, in the 19th Century, the British Empire has spread across the aether, and has established colonies as far out as Jupiter.

Arthur Mumby and his sister Myrtle live in a rambling house called Larklight orbiting the Moon.  Their lives are turned upside down when they are kidnapped by giant spiders and rescued by the fearsome pirate Jack Havock himself.  And things get really complicated when they uncover a plot to destroy the very heart of the Empire, London itself....

LARKLIGHT is a swashbuckling romp through a fantastically envisioned British Empire aboard ships reminiscent of those from Treasure Planet.  Art and Myrtle are engaging and dryly funny as they tell the story of how they traveled the solar system and defeated the evildoers...
Posted by Greg Leitich Smith at 2:45 PM