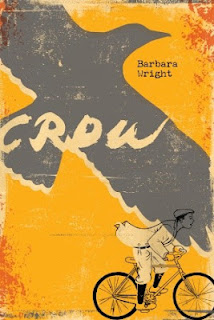 CROW, by Barbara Wright (Random House 2012)(ages 8-12).  It's Wilmington, North Carolina in 1898, and Moses Thomas has just finished fifth grade with perfect attendance.  His father works at the daily African American newspaper and is one of four African American aldermen on the city council.

His grandmother and mother were born into slavery.  But Moses's father knows that so long as Moses has an education and self-respect, he can grow up to make something of himself.

Although Moses has fun that summer (he gets to take his first train ride and starts to teach Boo Nanny how to read), there are ominous signs -- he has issues with his friends and tensions between the white and African American communities begin to rise...

CROW is a fascinating and poignant story of one boy's summer in the time leading up to the Wilmington Massacre of 1898.  Thought-provoking, but not preachy, CROW pulls no punches as it remains true to the era yet always maintains the perspective of an eleven-year-old.  Altogether, it's a compelling read with an engaging and likeable protagonist.
Posted by Greg Leitich Smith at 6:50 AM