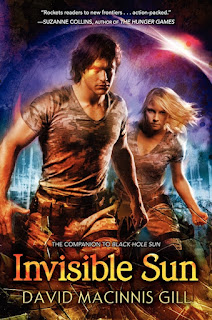 INVISIBLE SUN, by David Macinnis Gill (Greenwillow, April 2012)(ages 14+).  Former Regulators, now outlaws, Durango and Vienne are on a quest to retrieve data about Durango's past and the still-percolating plots his father left behind.  But the mission goes awry when Vienne is captured by agents of the insurgent mastermind Mr. Lyme.

Can Durango get her back or is he doomed to lost both her and all of Mars?

INVISIBLE SUN is a riveting and action-packed companion to BLACK HOLE SUN, revisiting a Mars that is red in tooth and claw.  With sardonic wit and intricate plotting, Gill brings a dystopian world to life.  Readers will eagerly await the conclusion to the trilogy.
Posted by Greg Leitich Smith at 1:58 PM