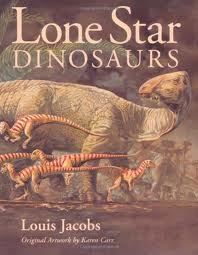 Happy Texas Independence Day!  One hundred and seventy-six years ago today, the Texas Declaration of Independence was signed in Washington-on-the-Brazos.

Texas does, however, have a rich legacy of dinosaurs, primarily from the Triassic and the Late Cretaceous Periods.  So I commend to your attention Louis Jacobs' LONE STAR DINOSAURS (Texas A&M Press 1999), illustrated by Karen Carr.  It's chock-full of fascinating information on dinosaurs in the Lone Star state.

LONE STAR DINOSAURS was, naturally enough, one of the resources I consulted when writing CHRONAL ENGINE and was a major factor in my deciding to set the Cretaceous scenes in prehistoric Texas (the contemporary scenes are in the Bastrop area).

In particular, according to the National Park Service website, the Aguja and Javelina Formations in the Big Bend area have been a source of over ninety dinosaur species, nearly one hundred plant species, and more than two dozen fish, frogs, salamanders, turtles, crocodiles, lizards, and early mammals. These include the dinosaurs Alamosaurus, Texacephale, Kritosaurus, and Edmontonia, as well as tyrannosaurs and deinonychosaurs; the crocodilian Deinosuchus; the pterosaur Quetzalcoatlus; and more. At least some of these appear in CHRONAL ENGINE. :-). 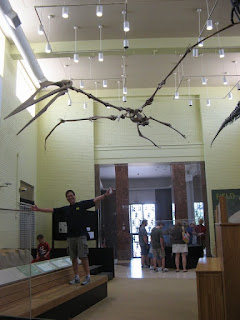 Posted by Greg Leitich Smith at 3:58 AM