WE'VE GOT A JOB: The 1963 Birmingham Children's March 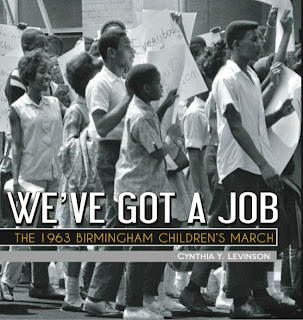 WE'VE GOT A JOB: The 1963 Birmingham Children's March, by Cynthia Levinson (Peachtree 2012)(10+).  In early May of 1963, thousands of Birmingham schoolchildren took part in a massive campaign to violate the city's segregation laws and thereby flood the city's jails. Over the course of some ten days, more than 4,000 children were arrested, andor had fire hoses and police dogs set upon them.  This is the story of four of them.

In WE'VE GOT A JOB, Levinson provides a perspective on the civil rights movement as a whole, as well as focusing on what it meant to four very different individuals.  With exceptional research including personal interviews with many of the parties involved, Levinson brings to life an inspiring moment of history of children empowered and determined to take on the system.

Posted by Greg Leitich Smith at 9:40 AM

Thank you, Greg! You and Cyn have been such great supporters. And your launch of Chronal Engine was awesome.