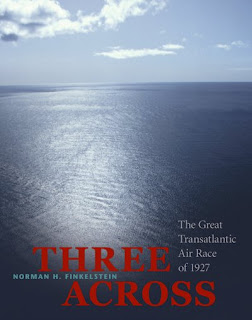 THREE ACROSS: The Great Transatlantic Air Race of 1927, by Norman H. Finkelstein (Calkins Creek/Boyd's Mills 2008).
In the spring of 1927, three teams are gathered with their aircraft to attempt to first non-stop air crossing of the Atlantic Ocean between New York and Paris: the Columbia, owned by millionaire Charles Levine; the America, whose team is led by the famous Arctic explorer Richard Byrd; and, of course, the Spirit of St. Louis team led by the then little-known Charles Lindbergh.

Weaving the narrative among participants on all three teams, Finkelstein engages the reader in the challenges and tribulations of the dangerous venture. Although the outcome is never in doubt, THREE ACROSS provides a gripping and suspenseful account of the epic quest, illuminating, in turn, each of perseverance, heartbreak, competitive zeal, and triumph.
Posted by Greg Leitich Smith at 11:21 AM