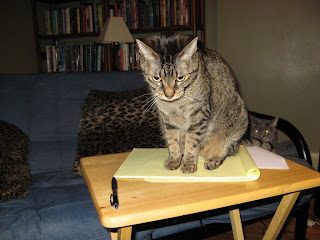 Go on over to Tony Abbott's blog and check out my writing spaces essay. Cyn's was up a couple months ago...

Cyn and I will be on a panel about "First Drafts" at the February monthly meeting of the Writers' League of Texas at 7:30 this Thursday, Feb. 19 at the League office in Austin (611 S. Congress Avenue). Sometimes getting that first draft down is the biggest hurdle to bringing a great idea to literary life. Find out how several authors approach the first draft. Note: "Before the program, join us at Doc's Motorworks Bar & Grill, 1123 S. Congress (two blocks south of the WLT office for a 'Mix and Mingle Happy Hour.'"

Also, mark your calendars for April 11: Authors Kathi Appelt and Cynthia Leitich Smith invite you to join them at 1 p.m. April 11 at BookPeople (Sixth and Lamar) in Austin. They will be celebrating the success of Kathi's The Underneath (Atheneum, 2008), which was a National Book Award Finalist and newly crowned ALA Newbery Honor Book, and the release of Cynthia's Eternal (Candlewick, 2009). The event will include very brief readings, entertaining commentary, and a signing by both authors. Hope to see you there!
Posted by Greg Leitich Smith at 12:55 PM