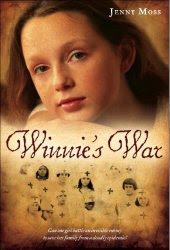 WINNIE'S WAR, by Jenny Moss (Walker 2009)(ages10-14). In her debut novel, Moss delivers a poignant story of living in a time of and, through, death.

It's the autumn of 1918; the war is almost over, but the town of Coward Creek, Texas, is bracing itself for the Spanish flu that has already killed thousands across the country and in nearby Houston.
With a family that's still living with the effects of the 1900 and 1915 hurricanes, Winnie decides she must do more than merely cope -- as friends, family, and neighbors succumb, she must help, but how?

Told in a compelling first-person voice that successfully captures small-town, early-twentieth century Texas, WINNIE'S WAR is a moving tale of how individuals respond to tragedy and death. Winnie and her friends are complex and likeable. Well-drawn major and minor characters alike mirror and amplify Winnie's conflicts in ways that will resonate with readers.
Posted by Greg Leitich Smith at 9:26 AM