THE WAY HE LIVED 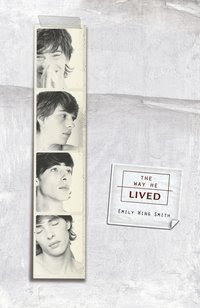 THE WAY HE LIVED, by Emily Wing Smith (Flux 2008), is a powerful and subtle novel of grief and loss.

Who was Joel Espen? Kind-hearted, selfless, giving, and more. And his death at age sixteen on a Scout camping trip is a shock to friends and family alike.

Now, weeks, months later, six teens from the same small Utah town whose lives intertwined with Joel's tell their stories, but also his. Each of their narratives illuminates Joel's life, the whole of which was greater than the parts they knew. Or thought they knew...
Posted by Greg Leitich Smith at 2:17 PM