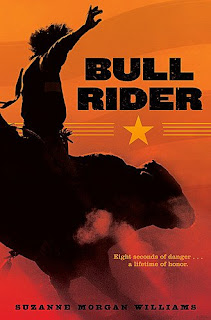 In BULL RIDER, Williams effectively captures the feel of a small, close-knit ranching community, delivering believable and likeable characters and an affecting arc. In short, BULL RIDER is a moving novel of hope, recovery, and family.
Posted by Greg Leitich Smith at 8:44 AM

Greg - this is great "boy book"! So glad you found it. Best - Janet