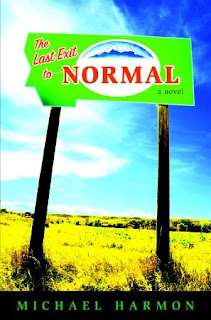 In THE LAST EXIT TO NORMAL, Harmon eschews cliches and portrays each of Ben, his father and stepdad, and the people of Rough Butte as authentic, realistic, and rounded. Ben's voice is wry, unaffected, and occasionally surprising as Ben ultimately finds his own way in a believable and satisfying fashion.
Posted by Greg Leitich Smith at 8:40 AM

hey i just finished this book yesterday and i loved it sooooo much! one of my favorite books yet! i sooo hope u make this book a series because its the best book ever i love it! so im begging please make it into a series!!! please please please! ive been telling all my friends about it to and knowing there probally going to read it to... well i promise you if u make this a series you will be the best auther of all time and i would so totally buy a copie of it!