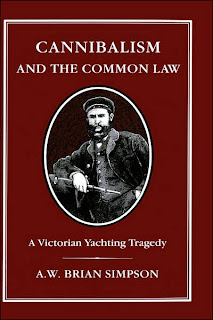 Any more?
Posted by Greg Leitich Smith at 8:58 AM

Ok, that is just weird and freaky about Poe and Richard Parker. Really?
You think there were out there on the boat and someone said, "hey, Richard, do you remember that story by Edgar Allen Poe?"

Ha! Almost -- oddly enough to modern sensibilities, there was a long-standing "Custom at Sea" whereby under such circumstances you were supposed to voluntarily draw lots; the loser would then be killed and eaten. Although they didn't do the thing with the lots, Dudley and Stephens argued he would have been willing and were very sympathetic defendants to the public of the time.

OK, so this gets curiouser and curiouser. Richard Parker is the name of the tiger in Yann Martel's Life of Pi (wonderful, amazing book). Now I know why he chose that name!

Really, Sara? That totally bumps up Life of Pi on my reading list!
Very cool!