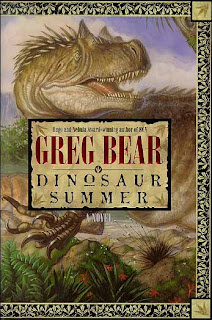 DINOSAUR SUMMER, by Greg Bear (Warner, 1998)(ages 12+) is an intriguing sequel to Conan Doyle's THE LOST WORLD and a nice coming-of-age story as well.  It's 1947 and fifteen-year-old Peter Belzoni lives with his father Anthony, a wildlife photographer, in a tenement (his mother left them for Chicago).  There's never enough money and Peter often feels like the grown-up and sometimes out of place with his adventure-loving father.

Peter's not sure how to take it when his father gets an assignment from National Geographic: covering the last performance of the last dinosaur circus in North America.  It's some decades after Professor Challenger et al. came back from the lost world, launching the "Dinosaur Rush," and dinosaurs are kind of passe.

What Anthony didn't tell Peter is that there's more to the assignment than watching performing animals:  the dinosaurs remaining in Otto Gluck's circus are to be returned to Venezuela, and Anthony and Peter will be going along on the expedition to document the event.  Along the way, they encounter dangers from humans and wild creatures alike, and Peter comes to terms with his parents' divorce and where he is and wants to be in the world.

DINOSAUR SUMMER offers a likeable protagonist and a great premise, with a creative admixture of fictional and nonfictional dinosaurs and prehistoric creatures.

Oh, and did I mention, the cover and interior illustrations are by Tony DiTerlizzi?
Posted by Greg Leitich Smith at 3:10 PM