Robinson Crusoe and Sam Magruder and all that... 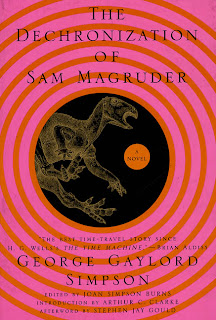 When you’re writing a novel in which dinosaurs and humans interact, you’ve really got only two choices: bring them to you or go to them.   The classic novels THE LAND THAT TIME FORGOT and THE LOST WORLD are examples of the former.  There don’t seem to be as many of the latter, but one I just came across is George Gaylord Simpson’s terrific THE DECHRONIZATION OF SAM MAGRUDER (St. Martin's Press 1997).  Simpson was one of the more renowned paleontologists of the 20th Century and the manuscript was found after his death in the 1980s by his daughter.  It has a forward by Arthur C. Clarke and an afterward by Stephen Jay Gould.
The novel is set in a framework similar to that of H.G. Wells' THE TIME MACHINE: several individuals discuss the implications of “tablets” they found, written by a human, and dated from the Cretaceous. The tablets tell the story of the time-traveling scientist Sam Magruder and his accidental transport back into time and his survival in the Mesozoic.

He encounters T.rex, sauropods, hadrosaurs, and various nasty theropods in somewhat dated representations (apparently Simpson did not take to the newfangled notion that dinosaur were active, warm-blooded, or could have feathers) and discusses his other attempts to survive -- incluidng trying to find shelter, hunt, and start a fire...
But the really intriguing thing is one of the questions posed at the beginning of the novel:  one character -- the Universal Historian -- opines that, by virtue of being lost in time, Sam Magruder is more lost, more alone than any human ever has been.  He argues that folks lost on desert islands or in outer space (the novel takes place a hundred years in the future) are not as lost as Sam Magruder, because they have at least the hope of rescue.  And that how he reacts to it is a sign of character.
I had a few reactions to this:  First, I think that in many recent robinsonnades (lost-on-a-desert-island stories) this despair over aloneness is absent.  I can't actually think of one off the top of my head in which this is addressed, other than ROBINSON CRUSOE itself.  Robinsonnades seem to have come to be more about physical survival than psychological.
But (second) I’m not entirely sure that Sam Magruder has absolutely no hope of rescue.  Admittedly, the novel sets it up so that, according to his theory of time travel, it would be impossible for anyone to duplicate Magruder's feat, and thus reach his precise point in time and space (apparently, you cannot control the time, date, or location of "landing.").
But, of course, that’s only in his time…and in the future, presumably, there’s an infinite amount of it, so surely there is the possibility that someone a thousand years from when he left and a more developed scientific and engineering background might be able to find him.  Also, it's just possible that Magruder's theory might be incorrect (oddly enough, he never does contemplate this possibility). 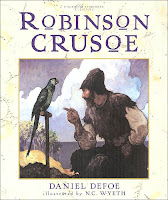 In any case, I think SAM MAGRUDER does portray that despair of (almost) absolute aloneness in a compelling manner.  Really, probably better than any robinsonnade I've read other than ROBINSON CRUSOE itself (Of course, in CRUSOE, overlaid was the despair of having been abandoned by God).
Another thing that came to mind, though, is that this concept of absolute aloneness and the enormity thereof is a great literary vehicle for introducing the idea of the immensity of time and just how "far away" 65 million years ago really is.  That is, in addition to the philosophical question(s) posed, it presents a handle for grasping time as "distance" so that the modern reader can appreciate being lost in time in much the same way that early eighteenth century readers would have understood being lost at sea.
Posted by Greg Leitich Smith at 12:19 PM