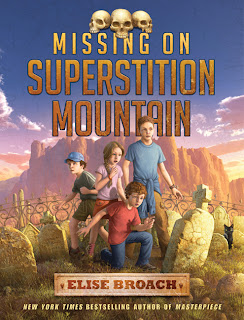 MISSING ON SUPERSTITION MOUNTAIN, by Elise Broach (Henry Holt 2011)(ages 8-12)(first in a series).  Eleven-year-old Simon, ten-year-old Henry, and six-year-old Jack have been moved by their parents to a small Arizona town, over which looms the forbidding Superstition Mountain.  They've been warned not to go there, but when Josie, their cat disappears, what choice do they have?

Once there, they find three skulls and decide that the many rumors about the mysterious place just might be true.  Why have people been disappearing for the past sixty years?  Is there really a mother lode of gold there?  Together with their next-door neighbor, ten-year-old Delilah, the Parker siblings embark to solve the mystery...

MISSING ON SUPERSTITION MOUNTAIN offers a thrilling and chilling mystery-adventure with an engaging cast and otherworldly setting.  With various threads left dangling, readers will be eagerly awaiting the next installment.
Posted by Greg Leitich Smith at 2:25 PM