At last week's Comic Con in San Diego, Steven Spielberg announced that JURASSIC PARK IV is in the works!  They have a story and a screenwriter and are hoping to make it "within two or three years."

In the meantime, go check out Jurassic Park Legacy, a resource on all things Jurassic Park, and an interview at Love in the Time of Chasmosaurs with its founder, Terry Alan Davis, Jr.

Also, Spielberg is producing TERRA NOVA, which premieres Monday, September 26, 2011, at 8/7c.  It's the story of a family who are sent back 85 million years from a future where humanity is faced with extinction and, apparently, features all kinds of Cretaceous (and other) critters.

As producer  Brannon Braga (of Star Trek: Voyager fame) put it, "we have dinosaurs we know from the fossil record but you get to make up your own dinosaurs as well."  (I think the "slasher" falls into the latter category :-)). 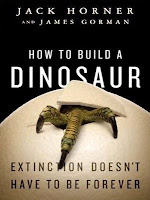 Paleontologist John ("Jack") Horner from the Museum of the Rockies is a consultant on the show (he also did Jurassic Park).
Posted by Greg Leitich Smith at 8:52 AM