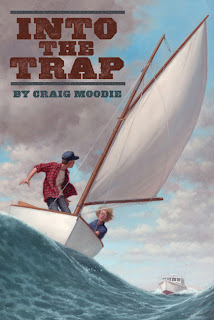 INTO THE TRAP, by Craig Moodie (Roaring Brook 2011)(age 10-14).  Twelve-year-old Eddie Atwell lives on an island off the coast of Massachusetts and comes from a long line of lobstermen.  It's his ambition to become one  himself.  But when his father tears his rotator cuff and thieves steal their catch, they could lose everything...

When Eddie stumbles upon the thieves' lobster cache and encounters Briggs Fairfield -- a rich-kid off-islander runaway from the local sailing camp -- he decides that it's up to him to stop the poachers and save the Atwell livelihood.  Together, the pair hatch a plot to catch the thieves.  But will it be enough?  And what if they, themselves, are the ones caught?

INTO THE TRAP is an exciting adventure on the water: a terrific story of friendship, danger, and justice, with an engaging protagonist and thrills aplenty.

Posted by Greg Leitich Smith at 5:35 AM