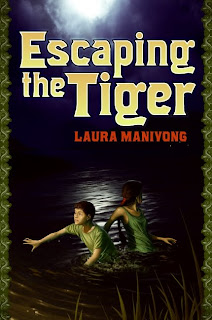 ESCAPING THE TIGER, by Laura Manivong (HarperCollins 2010)(10+). It's 1982 and twelve year-old Vonlai and his family have escaped from communist Laos across the Mekong into neighboring Thailand.

There, they are held at the squalid Na Pho refugee camp, where they must struggle if they are ever to survive to the brighter future they are hoping for. But when his sister is threatened, Vonlai takes matters into his own hands...

ESCAPING THE TIGER offers an engaging protagonist in a poignant and thought-provoking story of family and dignity. Vonlai's hopes and fears ring true as he deals with family, friends, and foes alike, and as he comes of age in the refugee camp. Flashbacks to their lives in communist Laos provide additional texture and contrast.

Posted by Greg Leitich Smith at 11:10 AM

Escaping the Tiger is a first rate read. And in light of our current-day dynamics and struggles with immigration it is a fantastic catalyst for discussion.