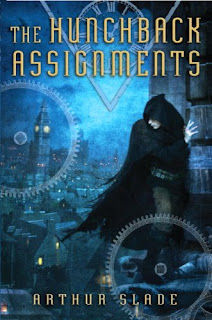 THE HUNCHBACK ASSIGNMENTS, by Arthur Slade (Wendy Lamb/Random House 2009)(ages 10+). In Victorian London, fourteen year-old Modo -- a shape-changing hunchback -- has been raised in seclusion since he was an infant by a Mr. Socrates, leader of a secret society determined to protect the British Empire.

His first assignment: to determine what has caused a group of young men -- Britain's finest -- to turn on their fathers with murderous intent, and figure out if it relates to the kidnapping of scores of orphans. 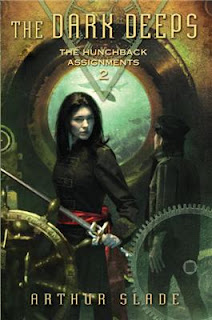 In THE DARK DEEPS: THE HUNCHBACK ASSIGNMENTS 2 (Wendy Lamb/Random House 2010), Modo finds his second: travel to New York to find out why one of their agents has disappeared and unlock the secret of the "Big Fish."

In THE HUNCHBACK ASSIGNMENTS series, Arthur Slade presents a likeable protagonist in a fantastical, steampunk-inspired Britain. Modo's struggles between duty and self are compelling and the stories are action-packed. Readers will eagerly anticipate book 3.
Posted by Greg Leitich Smith at 9:00 AM

Thanks for the kind words, Greg!