This post is to highlight some of the 2010 books I've read, particularly enjoyed, and blogged in 2010.

Caveats: (1) It is not intended to be comprehensive. (2) Really, all the books I've blogged this year are, in some sense, favorites (You can check them out in the sidebar). (3) I am still reading 2010 books and will likely blog some in the future. (4) I have read and enjoyed many more 2010 books than I have had a chance to blog and will likely add them to the blog in 2011.

Holler Loudly, by Cynthia Leitich Smith, ill. by Barry Gott. An exuberant read-aloud about a very loud boy. And, yes, I am married to the author :-).

Shark vs. Train, by Chris Barton, ill. by Tom Lichtenfeld. Whose plaything will reign supreme?

Mostly Monsterly, by Tammi Sauer, Ill. by Scott Magoon. Bernadette is a most unmonsterly monster...

Soar, Elinor, by Tami Lewis Brown, ill. by Francois Roca. The story of Elinor Smith and her attempt to fly under all the East River bridges...

One Crazy Summer, by Rita Williams-Garcia. Engaging protagonist in a turbulent era.

The Fantastic Secret of Owen Jester, by Barbara O'Connor. You'd try it, too...

The Healing Spell, by Kimberley Griffiths Little. Can Livie cure her mother?

The Strange Case of Origami Yoda, by Tom Angleberger. Is Dwight really channeling the powers of the Jedi? 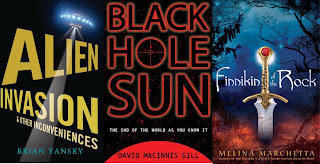 Alien Invasion and other Inconveniences, by Brian Yansky. The aftermath of the twelve-second conquest of the Earth.

Finnikin of the Rock, by Melina Marchetta. An epic fantasy with a touch of romance.
Posted by Greg Leitich Smith at 6:16 AM

Thanks for including Black Hole Sun in your list!

Wow, what a fantastic, wonderful surprise to wake up to, Greg! THANKS!!!

Wuhooh! Thanks so much, Greg.

I'm honored Bernadette is in such great company.

Thanks for including SVT, Greg!

Thanks for the mention, Greg. I'm honored to be on your list.