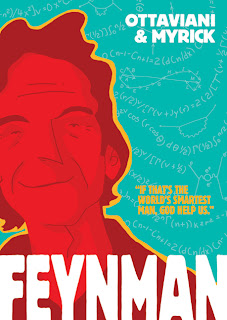 FEYNMAN, by Jim Ottaviani, ill. by Leland Myrick (First Second, Aug. 2011)(ages 12+).   In this biography in comic format, Ottaviani and Myrick bring to life one of the giants -- and true eccentrics -- of 20th Century physics.

From Feynman's childhood when his father told him stories about dinosaurs (!), young adulthood and college and graduate school, and later life when he worked on the Manhattan Project, won the Nobel Prize for his work on quantum electrodynamics, and served on the Challenger Commission, Ottaviani and Myrick provide a fascinating look at the private and public lives of a man who truly thought "outside the box."

FEYNMAN touches on the concepts behind quantum electrodynamics and the Feynman diagram, and provides interesting background to the genesis of the now-famous Feynman Lectures on Physics.  But in addition to introducing the professional life of the scientist, FEYNMAN also captures the mundane, the poignant, and the whimsical: Feynman's relationships with his wives, his safe-cracking, toying with military censors, and how he dealt with fame and the famous.

Altogether, FEYNMAN makes excellent use of the graphic format, providing a funny and fun introduction to the science and the scientist.  FEYNMAN should appeal to both the scientifically and non-scientifically inclined and makes an excellent accompaniment to Feynman's own memoirs, SURELY YOU'RE JOKING MR. FEYNMAN and WHAT DO YOU CARE WHAT OTHER PEOPLE THINK?

Posted by Greg Leitich Smith at 8:42 AM