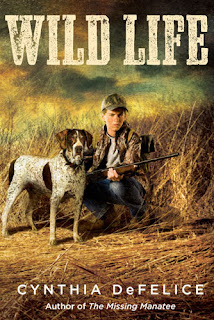 WILD LIFE, by Cynthia DeFelice (Farrar, Straus and Giroux 2011)(ages 8-12).  Twelve-year-old Erik Carlson and his best friend Patrick have just completed the New York State Gun Safety class and are eagerly anticipating this weekend's opening of pheasant season.  But then Erik receives the news that his parents -- both Army reservists -- have been called up for service in Iraq.

For the six months of his parents' deployment, Erik is to live with his grandparents (Oma and Big Darrell) -- whom he doesn't know at all -- in a remote corner of North Dakota.  When he arrives, the situation is even worse than he'd been dreading: Big Darrell is taciturn and mean, while Oma is quietly sad.  And the room they're making him stay in is filled with piles of junk...

When Erik finds and helps de-quill a German short-haired pointer that had encountered a porcupine, he begins to hope that things might be looking up -- maybe he actually will be able to hunt pheasant this season.  But Big Darrell doesn't hunt any more and tells him the dog can stay only one night.  Disappointed and fed up, Erik takes a shotgun and Quill, as he named the dog, and runs away, intending to live off the prairie and out of his grandparents' way...

WILD LIFE is a powerful story of family and secrets and loss and living-off-the-land.  As he learns to survive "like a pioneer," Erik's trek across the wild prairie and relationship with Quill make for a compelling and satisfying coming-of-age story.

Posted by Greg Leitich Smith at 9:34 AM