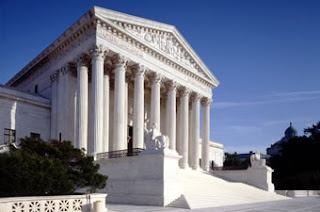 The Supreme Court recently held that a California law outlawing the sale of violent video games to minors (18 and under) was unconstitutional.  In doing so, the majority, per Justice Scalia, had a number of things to say about literature for young readers, demonstrating that, at least, the issue of, and concern about, violence in books and media for young readers goes way, way back:

California’s argument would fare better if there were a longstanding tradition in this country of specially restricting children’s access to depictions of violence, but there is none. Certainly the books we give children to read—or read to them when they are younger—contain no shortage of gore. Grimm’s Fairy Tales, for example, are grim indeed. As her just deserts [sic] for trying to poison Snow White, the wicked queen is made to dance in red hot slippers “till she fell dead on the floor, a sad example of envy and jealousy.” The Complete Brothers Grimm Fairy Tales 198 (2006 ed.). Cinderella’s evil stepsisters have their eyes pecked out by doves. And Hansel and Gretel (children!) kill their captor by baking her in an oven.

They had this to say about literature read by high-schoolers:

High-school reading lists are full of similar fare. Homer’s Odysseus blinds Polyphemus the Cyclops by grinding out his eye with a heated stake. The Odyssey of Homer, Book IX, p. 125 (S. Butcher & A. Lang transls.1909) (“Even so did we seize the fiery-pointed brand and whirled it round in his eye, and the blood flowed about the heated bar. And the breath of the flame singed his eyelids and brows all about, as the ball of the eye burnt away, and the roots thereof crackled in the flame”).

In the Inferno, Dante and Virgil watch corrupt politicians struggle to stay submerged beneath a lake of boiling pitch, lest they be skewered by devils above the surface. And Golding’s Lord of the Flies recounts how a schoolboy called Piggy is savagely murdered by other of the Flies.

They go on to discus some of the history of attempts at regulating "minors' consumption of violent" media:

This is not to say that minors’ consumption of violent entertainment has never encountered resistance. In the 1800’s, dime novels depicting crime and “penny dreadfuls” (named for their price and content) were blamed in some quarters for juvenile delinquency. When motion pictures came along, they became the villains instead. “The days when the police looked upon dime novels as the most dangerous of textbooks in the school for crime are drawing to a close. . . . They say that the moving picture machine . . . tends even more than did the dime novel to turn the thoughts of the easily influenced to paths which sometimes lead to prison.” For a time, our Court did permit broad censorship of movies because of their capacity to be “used for evil,” but we eventually reversed course. Radio dramas were next, and then came comic books. Many in the late 1940’s and early 1950’s blamed comic books for fostering a “preoccupation with violence and horror” among the young, leading to a rising juvenile crime rate. But efforts to convince Congress to restrict comic books failed. And, of course, after comic books came television and music lyrics.

And a couple of comments on the nature of reading:

California claims that video games present special problems because they are “interactive,” in that the player participates in the violent action on screen and determines its outcome. The latter feature is nothing new: Since at least the publication of The Adventures of You: Sugarcane Island in 1969, young readers of choose-your-own adventure stories have been able to make decisions that determine the plot by following instructions about which page to turn to.

As for the argument that video games enable participation in the violent action, that seems to us more a matter of degree than of kind. As Judge Posner has observed, all literature is interactive. “[T]he better it is, the more interactive. Literature when it is successful draws the reader into the story, makes him identify with the characters, invites him to judge them and quarrel with them, to experience their joys and sufferings as the reader’s own.”

The crusade against comic books was led by a psychiatrist, Frederic Wertham, who told the Senate Judiciary Committee that “as long as the crime comic books industry exists in its present forms there are no secure homes.” Juvenile Delinquency (Comic Books): Hearings before the Subcommittee to Investigate Juvenile Delinquency, 83d Cong., 2d Sess., 84 (1954). Wertham’s objections extended even to Superman comics, which he described as “particularly injurious to the ethical development of children.” Wertham’s crusade did convince the New York Legislature to pass a ban on the sale of certain comic books to minors, but it was vetoed by Governor Thomas Dewey…

Very nice wrap up, Greg. It seems, for the moment, that freedom of speech prevails, thanks to Homer.