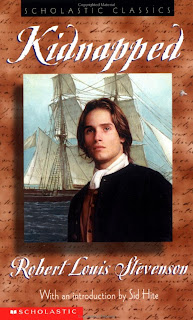 A couple years back, I did a post titled "Remember that book...?" in which I discussed some books that had appealed to me as a young reader, and my current reactions upon reading them.  I thought I'd take a look at some others...

What I remember of the story:  David Balfour gets whacked on the head and is sold into indentured servitude by his uncle and taken aboard a ship bound for the Carolinas sometime before the American Revolution.  He escapes when the ship runs aground and he has to make his way back across the wilds of Scotland.

The rest of the recollection:  I remember this one being intense and really kind of scary.  But, I did check it out of the library more than once.

And now: Still a great and intense adventure story, although at times David struck me as being a bit young for his age (17), especially given the era.  Stevenson also pokes gentle fun at robinsonades (island castaway stories) and there's a lot more having to do with the politics of the day than I remember:  I had no memory of the Jacobite subtext (the version I read was probably was a "middle grade" or edited-for-children version).

Written as a serial "boy's novel," KIDNAPPED feels older than TREASURE ISLAND, although should still appeal to fans of adventure and treachery in the Highlands and on the high seas.
Posted by Greg Leitich Smith at 1:39 PM