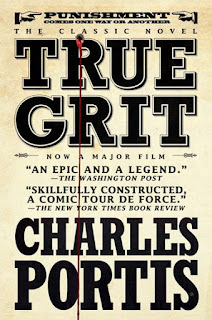 TRUE GRIT, by Charles Portis (Overlook Press 2010, orig. pub. 1968)(ages 12+).  It's the 1870s, and fourteen-year-old Mattie Ross is out to avenge her father's death at the hands of the coward Tom Chaney.  So she hires the tough, fearless, one-eyed, and frequently drunk federal marshal, Reuben "Rooster" Cogburn.  Accompanied by a Texas ranger named LaBoeuf who wants to bring Chaney back to Texas for killing a judge, the three set off into Choctaw Nation to bring Chaney back, dead or alive.

In TRUE GRIT, Portis evokes Mattie's gimlet eye and deadpan voice in a surprisingly funny novel of Old West justice, drive, and determination.  Definitely not to be missed.

Comment:  Like most kids of my generation, I grew up on the John Wayne movie; I was somewhat appalled when I first heard that the Coen Brothers were remaking it.  And then author-illustrator Mark Mitchell told me it had been a book first (yes, I hadn't realized that until recently :-)).

I was somewhat reluctant to try it, since I don't really have time for "adult" fiction.  But I picked it up off the shelf at Book People, read the first page, and loved the first-person voice (Mattie's).  I tend to think that, if published today, it might be considered young adult literature (It does have a kind of adult-looking-back overlay on it, though).  In any case, Mattie is a wonderful teen character, fearless and implacable, and without a hint of whininess.

i heard great things about the voice too. it's on my bedside table. maybe your nudge will push it to the top of the pile.