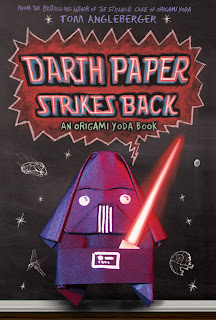 DARTH PAPER STRIKES BACK, by Tom Angleberger (Amulet 2011)(ages 8-12).  In this this sequel to THE STRANGE CASE OF ORIGAMI YODA, a darkness has descended upon Tommy's middle school.  Harvey, determined to prove that Origami Yoda is merely a hoax, brings his own Origami creation: Darth Paper, who is strong with the Dark Side.

It's not long before Dwight gets suspended and all the good Origami Yoda did last year appears to be unraveling.  Can Tommy and friends save Dwight and Origami Yoda?  Or will Harvey and the Sith prevail?

DARTH PAPER is a fun and satisfying follow-up to Origami Yoda, poking gentle fun at middle school angst, school bureaucracy, and the magic of finger puppets.

Note: Cyn and I had the chance to see Tom Angleberger speak at BookPeople last week.   Here are a couple pictures:

Posted by Greg Leitich Smith at 2:21 AM