MOONSHADOW: RISE OF THE NINJA 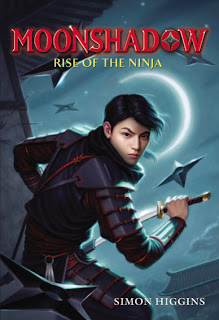 MOONSHADOW: RISE OF THE NINJA, by Simon Higgins (Little Brown 2010)(10+).  In this historical fantasy based on medieval Japan, the orphan Moonshadow has been raised as a ninja warrior spy by the members of the Grey Light Order to serve the shogun and preserve the peace against fractious warlords.

In addition to being a master of stealth and swordsmanship, Moonshadow possesses the "eye of the beast," the ability to see through the eyes of animals.  Now, on his first mission, he must put all his skills to the test as he goes in alone to the the castle of a rebel warlord who wants to overthrow the shogunate...

MOONSHADOW: RISE OF THE NINJA is a thoroughly fun, action-packed yarn.  Altogether, an engaging story of friendship, honor, and belonging.

First in a series, originally published in Australia as MOONSHADOW: EYE OF THE BEAST.
Posted by Greg Leitich Smith at 3:52 AM