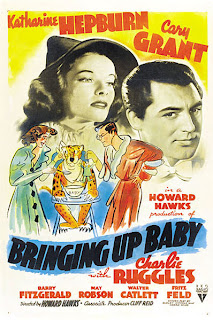 In the 1938 Howard Hawks movie, BRINGING UP BABY, Cary Grant plays a paleontologist with a number of problems:  first, he's trying to get ahold of the last piece of his "Brontosaurus" -- the (fictional) "intercostal clavicle" bone.  Second, he's trying to solicit a big donation from one of his museum's prime benefactors.  Third, he's about to get married.  Fourth, he runs across a ditzy heiress played by Katherine Hepburn and who has decided that she wants to marry him (her aunt happens to be the one considering the big donation).  Throw in a leopard (actually a jaguar), a dog that runs away with the bone, another jaguar, and a trip to the suburbs, and there's considerable mayhem...

I bring this up because a story about the type specimen of T.rex that just came to light.  It seems that when the skeleton (the first T.rex ever discovered) was sold by the American Museum of Natural History to the Carnegie Museum in the 1940s, it was missing a piece.  This was not discovered until recently, when a rib bone bearing the identification of the Carnegie T.rex was found in storage at the American Museum.  So the folks from the American Museum gave it to a guy with a back pack and sent it on its way...No word on whether any leopards were involved.

Oh, and apropos of nothing, in the movie NIGHT AT THE MUSEUM, Rexy, the T.rex skeleton, plays fetch with a rib bone.  Just saying.

Here's a link to the story on NPR.
Posted by Greg Leitich Smith at 8:12 AM