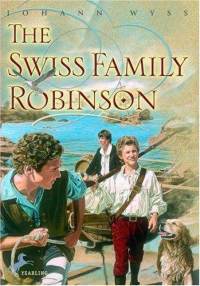 What I remember:  A Swiss clergyman and his wife and four sons are stranded on a (really big) desert island when their ship crashes onto a reef in the middle of a storm.  There, they survive alone for a decade, encountering an extraordinary array of flora and fauna, build a tree house, and generally bring civilization to the antipodes.

The rest of the recollection:  This was one of my favorite books as a kid.  I remember taking it out of the library in third or fourth grade and never wanting to return it.  Just the idea of having to make do without modern conveniences was intriguing.  And it actually hit fairly close to home, since many members of my family grew up without many of the basics (plumbing, electricity, cable TV) we take for granted today.

I also found interesting the details on how they went about building the tree house, installing the plumbing, etc.  The animal and the botany lectures were also fun, although even than, I knew that certain, er, liberties were being taken.

And now:  It's still an absolutely terrific adventure and worth the time.

Finally, I always wondered why the family's last name was "Robinson," since they were Swiss and all, and it wasn't until recently that I discovered it (probably) wasn't.  The title was a reference to the fact that the book was a robinsonade, a Robinson Crusoe-type adventure (Back in the day, it was apparently the name of an entire genre, much like "science fiction," etc.).
Posted by Greg Leitich Smith at 11:58 AM