One of the resources I used when I was writing CHRONAL ENGINE was Mike Everhart's Oceans of Kansas (Indiana University Press 2005), covering the flora and fauna of the Western Interior Seaway.

Michael Everhart is the Curator of Vertebrate Paleontology at the Sternberg Museum of Natural History in Hayes, Kansas. He also maintains the Oceans of Kansas web site.  Recently, he graciously agreed to answer a few questions.

1. How did you become/what made you decide to become a paleontologist? Any words of advice to those who might want to pursue such a career?

Being a paleontologist is actually my third career. I worked in the environmental area of public health (12 years) and the aerospace industry (17 years) before becoming a paleontologist. That said, I've always been interested in paleontology and have been collecting fossils from the Smoky Hill Chalk for more than 40 years.
It is a subject that I've been fascinated with from at least the 5th grade when I read a book by Roy Chapman Andrews called "All About Dinosaurs." Actually, the book wasn't all about dinosaurs. There were two chapters describing the marine creatures from western Kansas, mosasaurs, plesiosaurs and pterosaurs. Somehow that stayed with me until I was able to make a trip "out west" during my senior year in college, and I was hooked.


The best advice I can give to anyone wanting to become a paleontologist is to study hard in school, especially in the sciences and mathematics. Do well in English because you will need to read and write scientific papers. Paleontology isn't just about going to exotic places and digging up bones.  It involves knowing about what you are collecting and being able to describe it to others.
There are two general paths to becoming a paleontologist: geology and biology. You should plan to get either a geology or a biology degree as an  undergraduate in college. From there, you can specialize in to different fields of paleontology in graduate school. But on either path, you need to get as much education in the sciences as you can because paleontology is becoming more and more technical as we acquire the tools to study fossils.

2. You’re adjunct curator of the Sternberg Museum, which is associated with Fort Hayes State University. Can you tell us about the museum and what you do there?

The Sternberg Museum of Natural History in Hays, Kansas was more or less established by George F. Sternberg in the late 1920s. He was the director of the museum for many years. After he retired, the museum was called the "Sternberg Memorial Museum." When we moved to our new building in 2000, the museum was given its current name in his honor.
While well known for the fossils that are exhibited there,including the famous "Fish-within-a-fish," the museum has an extensive natural history collection. I work in the vertebrate paleontology area, primarily with marine fossils from the Late Cretaceous seaway that once covered the state. Mostly, my job involved collecting preparing Kansas fossils, studying them, and describing them.

3. You’ve written extensively (and have a great web site) about the creatures of the Western Interior Seaway (mosasaurs, sharks, plesiosaurs). What draws you to it (them)?
I am interested in these marine fossils because they occur here (I don't have to go halfway around he world to collect them), and because they have generally been ignored for a long time. It's not likely that I can go to Montana and find a new dinosaur, but I've already named two mosasaurs from western Kansas.
Marine vertebrates, in spite of being the first major fossils discovered in Europe in the late 1700s, 50 or so years BEFORE the word "dinosaur" was invented, they have been largely overlooked since about the 1820s. Dinosaurs have had the better press since then.
The fact is, however, that during the Late Cretaceous, the earth was even more of a "water world" than it is today.  There were no ice caps, and the oceans covered about 85% of the Earth's surface.
Marine reptiles greatly outnumbered the ground-pounding dinosaurs who were squeezed on to the remaining land surface. The Mesozoic should be called the Age of Sea Monsters, not the age of dinosaurs.  Besides that, marine reptiles are very interesting creatures, evolving rapidly from small shore dwelling lizards into giant animals that were as well adapted to the ocean as are modern whales and porpoises.  Fascinating creatures!

4. Recently, there has been controversy about whether to make Xiphactinus or Pteranodon the state fossil of Kansas. Without taking sides, can you make the case for both (and explain what either has to do with Kansas)?
Both suggestions have a basis in the early history of paleontology in Kansas. Here is what I have told a legislator.
While I am supportive of anything that would generate interest in (and a better appreciation of) our fossil resources here in Kansas, I'm not sure that a big fish that looks like a  "Tarpon on steroids" [ed. note: see photo above] is the best choice to represent Kansas as the State Fossil.  Xiphactinus audax is certainly one of the best known fossil of a fish in the world, given all the attention that Sternberg's famous  "Fish-within-a-fish" specimen has generated since it was discovered in 1952 (e.g. one of the most photographed fossils in the world). That said, Kansas is also the home of a number of fossils that have been collected here, and are nearly unique to the state. Both the Sternberg Museum and the University of Kansas Museum of Natural History have examples of large mosasaurs on exhibit.


Tylosaurus proriger was first described from Kansas by E.D. Cope in 1869, based on a large skull found near Monument Rocks in western Gove County, and spirited away to the Harvard Museum of Comparative Zoology. But we've found lots of them since....

We also have a giant turtle (coincidentally our state reptile being the Box turtle) called Protostega gigas -- as large as a small car -- that was first found here first in 1871. (Still mostly found in Kansas.)
The first examples of a flying reptile (Pteranodon) and a large marine bird (Hesperornis) were collected here by O.C. Marsh (Yale) in 1871. Pteranodon was initially described with teeth (it has none), and Hesperornis, being a bird, was naturally assumed not to have them.
The discovery a Hesperornis specimen near Russell Springs with a skull in 1872 showed, in fact, that it did have teeth, but another fossil bird, Ichthyornis dispar, discovered in 1872 by Professor Benjamin Mudge (1st State Geologist / professor at the Kansas Agricultural College, now K-State), is recognized as the first known bird with teeth.
Each of these were discovered first in Kansas and are almost unique to the state, with small numbers occurring elsewhere.  Personally I think Pteranodon longiceps would make the best state fossil: It's big (24 foot wingspan), it is everyone's favorite flying  "dinosaur" and is nearly instantly recognized by every child (and adult) in the U.S.
Pteranodon has appeared in dozens of "adventure" movies (mostly bad likenesses), from The Lost World to King Kong, through Jurassic Park and most recently in National Geographic's IMAX movie Sea Monsters.
Almost ALL of the known specimens come from Kansas (limited numbers of poor quality material from Wyoming and South Dakota).  Some of the best, most complete specimens have come from Lane County, Kansas, both of which, unfortunately, were shipped off to museums in Canada.

In any case, I would pleased to provide whatever technical support for naming a state fossil that I can. 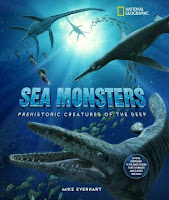 5. On your web site, you state that you were science advisor for the National Geographic IMAX movie SEA MONSTERS. Can you tell us what that entailed?

I went to National Geographic in November of 2001 with the suggestion that a discovery by Charles Sternberg of a mosasaur that had eaten a plesiosaur would make a great documentary for TV. The specimen had been described in 1921 and acquired by the United States National Museum where it is on display today, but the stomach contents and their implications had been largely ignored by subsequent paleontologists. I came across Sternberg's note and went to Washington to see the specimens.  Then I wrote a paper on it.

National Geographic thought it was an interesting idea and planned to do a magazine article, a TV documentary and later a movie version.. The magazine article came out in December 2005 and was really a disappointment, even though I had been involved as an adviser. The TV project got shelved for unknown reasons, and the first attempt at getting NSF funding for the theater version was turned down, but National Geographic went back, got funding approval and the race was on. 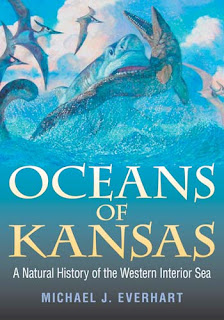 My Oceans of Kansas book was just out (June 2005) and doing well. NG hired a film company to do an IMAX feature film and they put together a script.  I sat down with them and discussed what could and could not be done realistically with their proposed portrayals.  From there, the script matured and several of us (paleontologists) were brought on board as science advisers to the film company.
The film company hired animators and started putting together the reconstructions of the animals we were going to show.  We met several times a week over the Internet discussing the various reconstructions and how they would have looked, moved, acted, etc.  We got to see the movie scene by scene as it was being assembled.
In June 2006, the film company came to Kansas and shot almost all of their historical scenes in the state (interesting because the movie shows discoveries in The Netherlands, Israel, Australia and Texas).  Later that year, I got a contract to write the book (Sea Monsters) for the movie and everything started to come together.  The movie opened worldwide in October, 2007 and I was able to attend several of the openings.
6.  Thank you for taking the time and sharing your experiences!
Photos of Dr. Everhart, Xiphactinus, Ichthyornis, and Tylosaurus proriger are courtesy of the Mike Everhart, Oceans of Kansas Paleontology.
Posted by Greg Leitich Smith at 7:32 AM