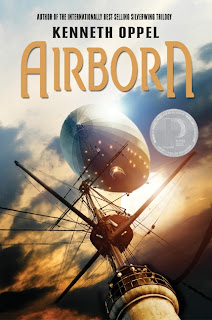 At fifteen, Matt Cruse is the youngest, smallest cabin boy aboard the airship Aurora.  Beyond anything else, it is his dream to someday captain a vessel like the Aurora.

On one fateful trans-Pacificus crossing, the airship rescues an off-course balloonist, who babbles about seeing beautiful creatures in the sky, before he dies.

Some months later, Kate DeVries, the balloonist's beautiful and wealthy granddaughter, embarks on the Aurora, to see if she can track down the mysterious creatures and prove to the world her grandfather was not a madman.

Matt is more than willing to lend a hand, and the two begin to develop a tentative friendship, when the Aurora is attacked by a dirigible belonging to the notorious and murderous pirate Vikram Szpirglas...

AIRBORN is a rousing, swashbuckling adventure  and coming-of-age story.  The alternate steampunkish Earth, where dirigibles are the basis for air transportation and airplanes don't exist, is convincing and richly detailed.  Matt and Kate are believable and their relationship is complex and compelling.

Their tale continues in the equally terrific SKYBREAKER and STARCLIMBER.

Posted by Greg Leitich Smith at 6:41 AM