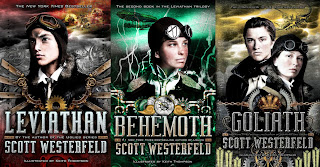 THE LEVIATHAN TRILOGY: LEVIATHAN (Simon & Schuster 2009), BEHEMOTH (Simon & Schuster 2010), and GOLIATH (Simon & Schuster 2011), by Scott Westerfeld, ill. by Keith Thompson.  Fifteen year old Alek flees from his home into the night with a handful of retainers when his parents -- the Archduke Franz Ferdinand and his wife -- are murdered in Serbia.  At the same time, Deryn Sharp, disguised as a boy, enlists as a midshipman on the British airship Leviathan.  Together, as Europe erupts into war, their lives intertwine in an around-the-world adventure and in ways that they couldn't possibly have imagined...

THE LEVIATHAN TRILOGY offers a fascinating alternate history and steampunk technology, along with action and adventure, and compelling and likeable co-protagonists.  Three absolutely terrific, fun reads.
Posted by Greg Leitich Smith at 5:03 PM