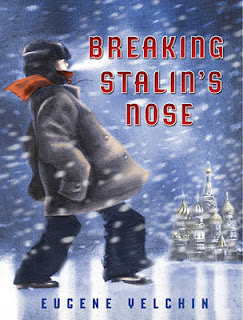 BREAKING STALIN'S NOSE, written and illustrated by Eugene Yelchin (Henry Holt 2011)(ages 9-12).  Ten-year-old Sasha idolizes his father, whom Comrade Stalin himself awarded the Red Banner, for his work with State Security.  And tomorrow, when Sasha will finally be allowed to join the Young Pioneers, his father will tie his red scarf around his neck.

But that night, Sasha's father is arrested as an enemy of the people, which means Sasha is an enemy, too.  He will never be allowed to become a Young Pioneer and the safe world he thought he knew is gone forever.

BREAKING STALIN'S NOSE exquisitely portrays Sasha's awakening to the corruption and oppression in Stalinist Russia while retaining a convincing child-centric point-of-view.  Chilling, fascinating, and at times horrifying.
Posted by Greg Leitich Smith at 6:37 AM

Great title! I don't think I have read any MG about this period in Soviet history and love the sound of this story. Thanks for the recommendation.