Remember that Book: CAPTAIN OF THE QUEENS 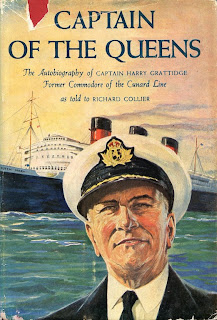 CAPTAIN OF THE QUEENS: THE AUTOBIOGRAPHY OF CAPTAIN HARRY GRATTIDGE, FORMER COMMODORE OF THE CUNARD LINE, AS TOLD TO RICHARD COLLIER (Dutton 1956).

What I remember: Harry Grattidge was one of the last captains of the RMS Queen Mary and RMS Queen Elizabeth, once the premier ocean liners in the world and the pride of Britain's Cunard Line.  CAPTAIN OF THE QUEENS tells Grattidge's story from his days as a lowly cabin boy aboard a sailing ship, his coming of age at sea, and his rise to the highest rank at Cunard.

The rest of the recollection:  I read this in a volume of Readers' Digest Condensed Books and recall being completely captivated.  I don't remember exactly when I read it, but it would probably have been around 7th or 8th grade.  I was fascinated by ships and airplanes and spacecraft and really cool acts of engineering in general.

A couple details stood out, though, that had nothing to do with the engineering itself.  The first was an anecdote about how the captain of a ship has to be on top of every detail, even those that seem the least important.  To illustrate this, Grattidge related a story of how he had to change the chaplain's Sunday hymn selection when the Duke and Duchess of Windsor were traveling aboard Queen Mary.  The hymn that got axed?  Crown Him with Many Crowns.

The other was on the order of "don't get cocky kid:"  On his first voyage as captain of Queen Mary, he ran her aground in harbor...

And now:  Still a fascinating and captivating read of a bygone era, telling Grattidge's life story wrapped around an account of his last voyage in 1953 as captain of Queen Elizabeth.  Although written for adults, I think it would still appeal to young adults who enjoy history or historical fantasy of the steam and diesel eras.
Posted by Greg Leitich Smith at 8:55 AM

Have just about read through his book currently; the contrast in his life, having gone from poverty, hunger and great hardship at the beginning of his career, and wrapping it up among excessive opulence, endless parties with diet so rich it sometimes made him ill, is well worth note in and of itself.

The grounding incident apparently disturbed him for the rest of his life, due to the fact that he was at the time prevented fom making any public statement concerning the particulars. Her starboard anchor fouled a series of D-Day era steel cables as they were attempting to depart Cherbourg. With the wind blowing gale force the Mary would not respond to helm or engines and gently touched astern after several minutes of trying everything they knew.

In any case, plenty of interesting material and glad to have found it.

Yes, there's something very "Two Years Before the Mast" about those early years.