In honor of NCTE/ALAN being in Chicago this year, I thought I'd toss in a post about Chicago dinosaurs. :-).  If you have the time, check out the Field Museum: 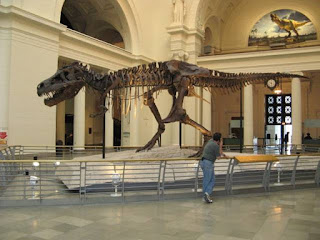 The Field Museum of Natural History (Chicago): My hometown museum, still one of the best in the world. The Field Museum is part of a lakefront museum campus that includes the Shedd Aquarium and Oceanarium and the Adler Planetarium. Just up Lake Shore Drive is the Lincoln Park Zoo, and a short drive south is the Museum of Science and Industry.

The Field is home to Sue, one of the largest, most complete Tyrannosaurus rex skeletons ever found, as well as a Daspletosaurus and a host of other, less carnivorous dinosaurs (like Parasaurolophus and Diplodocus).

Sue is prominently placed in the Stanley Field Hall (the main hall), with the elephant diorama and the big totem poles. On the balcony above the skeleton is the actual skull (the real one being too big to mount) and a mural depicting what Sue would've looked like in real life.

Upstairs is the Evolving Planet exhibit, which takes you chronologically through the eras of life on earth. Dinosaurs on display include Triceratops, dromaeosaurs, stegosaurs, sauropods (including a juvenile Rapetosaurus), and hadrosaurs, such as Parasaurolophus. The classic Charles M. Knight murals still adorn the walls.

And sometimes in Chicago, you see dinosaurs in the oddest places: be sure to check out the brachiosaur at the United Terminal at O'Hare Airport (a duplicate of the one outside the Field). 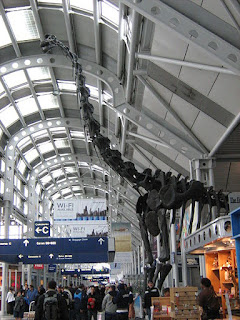