You'll recall the wildfires that devastated Bastrop in early September.  Here are a couple pics along US 71 from when Cyn and I drove through later that month. 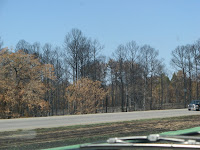 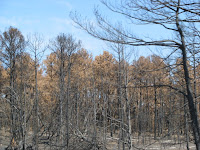 If anything, the photos understate the damage. That time of year, all the trees should be fairly lush and green.

To assist, the Austin SCBWI is collecting money and book donations for the giveaway, through December 8.  Books can be anything from picture books to young adult novels.

Details here.
Posted by Greg Leitich Smith at 8:08 AM