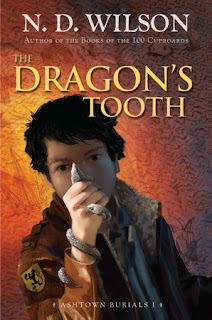 THE DRAGON'S TOOTH (Ashtown Burials, Book 1), by N.D. Wilson (Random House 2011)(ages 10+).  Twelve year old Cyrus and his sister Antigone have been living with their older brother Dan in a decrepit motel in Wisconsin for the past two years, their father dead and their mother in a coma.

Then a strange old man shows up and gives Cyrus a mysterious artifact and set of keys, the place is burned to the ground, and Daniel goes missing.  To get him back, Cyrus and his sister are drawn into the machinations of the mysterious Order of Brendan, jailers of semi-immortal villains and caretakers of powerful mystical objects...

THE DRAGON'S TOOTH offers a well-constructed and gripping fantasy with high stakes and adventure.  Cyrus and Antigone are likeable and believable as siblings and as they come together to face a world in which legend has become reality.
Posted by Greg Leitich Smith at 11:39 AM