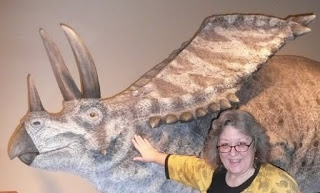 Kelly Milner Halls grew up in Texas, went to high school in California, and now lives in the Pacific Northwest.

She is the author of numerous nonfiction books for young readers, including the RANDOM HOUSE DINOSAUR TRAVEL GUIDE, DINOSAUR PARADE, DINOSAUR MUMMIES, and TALES OF THE CRYPTIDS.  Above, she poses with Pentaceratops.