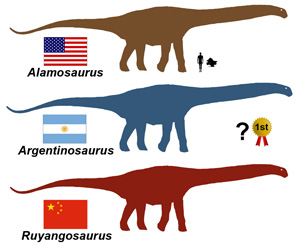 Alamosaurus is one of the latest sauropods to be found in North America, coexisting with Tyrannosaurus rex.  Previously it had been thought to be kind of a smallish sauropod, only 60-70 feet long.  Turns out, it's probable the specimens that were used to make the size estimations were based on juvenile bones.  A recent papers reveals Alamosaurus was around the size of Argentinosaurus, one of the biggest dinosaurs ever.

Here's a link to the news release, and here's one to the actual paper.

Being a Texas, I kind of like the fact that it's called Alamosaurus, especially since specimens have been found in Big Bend (Consequently, several make an appearance in CHRONAL ENGINE).  Unfortunately, however, it's named after a site in New Mexico, not the mission in San Antonio.

Anyway, in other Texas dinosaur news, the Austin Children's Museum is hosting the exhibit "Dinosaurs: Land of Fire and Ice," for a limited engagement through January 16, 2012.  As part of it, they're sponsoring a "Dino Costume Contest" through January 10, 2012 (The activities and displays seem focused on ages 3-10).

Also, I seem to have just missed the 21st Annual Fossil Fest, sponsored by the Paleontological Society of Austin.  Wait til next year!

Finally, I was just at the web site for the Dinosaur Park in Bastrop, just west of the town and across from the Hyatt Lost Pines Resort.  We haven't been there for a while, but it seems they have added a bunch of dinosaurs, including a 45 foot tall Brachiosaurus.

And, finally (really, this time), yesterday Carmen Oliver delivered more than 1000 books for the Friends of the Bastrop Library outreach.  She blogs about it here.