All right, this one features neither a writer nor a dinosaur, but a children's literature professional and a prehistoric mammal.  But the photo (below) was too good to pass up.

So, henceforth, I am expanding the feature to include all children's literature professionals, including teachers, librarians, editors, agents, book designers, etc., as well as authors and illustrators.  But I'm still going to call it "Writers and Illustrators and Dinosaurs," because "Children's Literature Professionals and Prehistoric Beasts" is too unwieldy.  Be warned :-).

So if you're in the business, drop me a pic at greg AT gregleitichsmith DOT com.

And, now, the featured guest:

Elizabeth Law began her career in children's publishing as an assistant at Viking Children's Books, leaving eighteen years later as associate publisher of both Viking and Frederick Warne imprints. 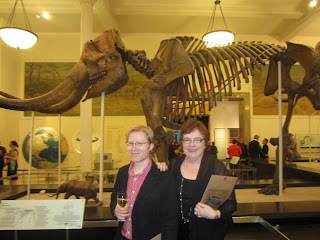 Above, Elizabeth Law poses with Broadway star Anthony Rapp in front of a proboscidean at the American Museum of Natural History in New York.
Posted by Greg Leitich Smith at 7:34 AM