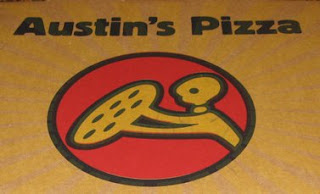 Day 4 of the Pizza-a-day plan!

Austin's Pizza (various locations). Never tried their pizza before, but apparently they've been around since 1999. I ordered the "Downtown Special," i.e., a thin crust pepperoni, sausage, mushroom, and black olives (along with a side "Zilker Garden" salad -- the salad, incidentally was probably the best of the bunch so far.).

The pizza, too, was quite good, and was delivered hot in about half an hour. The crust had a great crispy, chewy texture and the sausage and pepperoni were flavorful enough to not overwhelm or be overwhelmed by the olives. The sausage was of that pea-gravel-sized kind that I always find a little weird, but allowed for even coverage over the entire surface of the pizza. 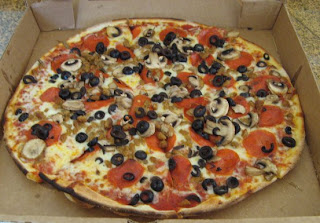 All in all, I was very favorably impressed: Both pizza and salad were excellent. Definitely will have to try them again sometime...
Posted by Greg Leitich Smith at 7:35 AM

One of my favorites. Unfortunately, We don't get it too often. When you have kiddos ordering "cheese" it makes sense to keep it simple.

P.S. Hubby loves your blog! I'm sending him the link.