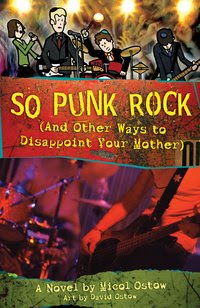 SO PUNK ROCK (AND OTHER WAYS TO DISAPPOINT YOUR MOTHER), by Micol Ostow (art by David Ostow)(Flux 2009). Ari Abramson is on a mission during his junior of high school: avoid studying for the SAT, get out from under the thumbs of his academically-intense parents, and form an indie rock band so as to rise up the ranks of "coolness" at Gittleman Jewish Day School.

In this last enterprise, he enlists his best friend, the ultra-popular Jonas Fein; and the religiously conservative Yossi Gluck (and his sister Reena). Along the way, to their surprise, they become something of a hit. But as Ari comes to terms with his new-found popularity, he discovers there's more to his friends and him than he ever imagined.

With a fresh voice and terrific characters, SO PUNK ROCK is a hilarious look at high school, rock bands, and taking control of one's life. Highly recommended.
Posted by Greg Leitich Smith at 3:30 PM