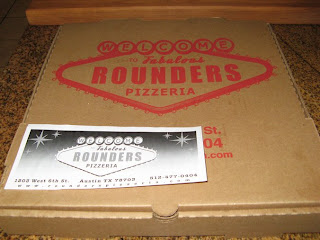 Day 5 of the Pizza-a-Day Plan:

Rounders Pizzeria (1203 W. 6th Street), like Home Slice, bills itself as "New York style pizza," and despite that, is a pretty good pizza. :-). (I'm not quite sure what makes it a New York style, other than the fact that it's flat and the pieces are cut into large wedges that are meant to be folded in half lengthwise.).

Anyway, I ordered a salad and a small sausage, green pepper, onion, and mushroom pizza. Delivered hot after about forty-five minutes, the crust was crisp and crunchy but soft enough to be folded (and not gummy). Toppings were plentiful, with the sausage in large strips, which I would guess perform better under the above-described "fold" maneuver than would simple chunks. The cheese was also quite good, with just the right texture (meltedness?). 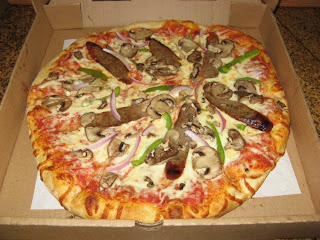 In sum, yet another excellent offering from Rounder's!
Posted by Greg Leitich Smith at 6:22 PM

Okay, next time you're in NYC, go to Patsy's (Columbus Ave) if you want to a good New York pizza. Or Grimaldi's in Brooklyn, I hear; I can't vouch for it myself.