THE MORGUE AND ME 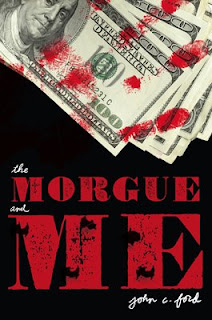 THE MORGUE AND ME, by John C. Ford (Viking 2009). The summer after high school graduation, Christopher lands a job in the morgue of his small town in Michigan. But when he discovers the coroner apparently took money to cover up a murder, he takes action, and his efforts to uncover the murderer lead to a web of deceit and intrigue that reaches the town's highest levels of political power, as well as closer to home than he'd like.