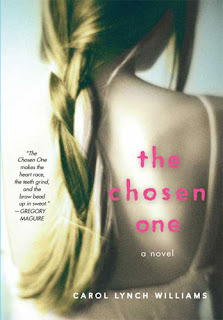 THE CHOSEN ONE, by Carol Lynch Williams (St. Martin's Press 2009). Thirteen year old Kyra has twenty brothers and sisters, three mothers, and one father. She lives with her loving family in the remote compound of a reclusive polygamous religious sect called "The Chosen."

But she remembers better days, when the Chosen were allowed to leave the compound and allowed to read works of fiction. Always wary of falling into the trap of sinfulness, she nevertheless periodically sneaks away to visit the local library bookmobile; arranges secret trysts with Joshua, the boy she thinks she's in love with; and wonders whether outside medical care would help with her mother's difficult pregnancy.

When The Prophet declares he has seen a vision she must become her uncle's (her father's sixty year old brother) seventh wife, her questioning begins in earnest and she realizes she will have to choose between a hateful marriage and leaving all that she loves behind.

THE CHOSEN ONE is a compelling, finely-wrought, exquisitely written tale of one girl's difficult journey and struggles with temptation, hypocrisy, and group thought control. Throughout, Kyra is fully realized and three-dimensional. Highly recommended.
Posted by Greg Leitich Smith at 12:38 PM