THE BOOK OF THE MAIDSERVANT 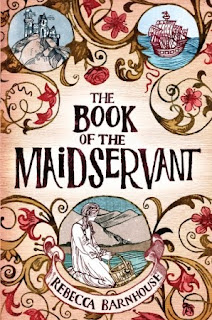 THE BOOK OF THE MAIDSERVANT, by Rebecca Barnhouse (Random House 2009)(ages 12+). The holy woman, Dame Margery Kempe, is on pilgrimage to Rome, so naturally, she must take Johanna, her maidservant. Along the way, the pair fall in with an eclectic group of fellow pilgrims, most of whom treat Johanna as if she was their servant and are antagonized by Dame Margery's frequent preaching and crying and gnashing of teeth (she feels the suffering of the Virgin Mary).

Angry at her situation and her mistress, Johanna is eventually abandoned and so must make her way alone. But how can she, with no money and no knowledge of the language?

THE BOOK OF THE MAIDSERVANT is apparently based on the 15th century Book of Margery Kempe, the first autobiography in the English language. Told with a fresh voice and wry humor, MAIDSERVANT offers an fascinating glimpse into the travails of 15th century life.
Posted by Greg Leitich Smith at 11:21 AM