I WANT TO LIVE: THE DIARY OF A GIRL IN STALIN'S RUSSIA 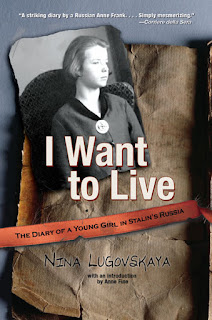 I WANT TO LIVE: THE DIARY OF A GIRL IN STALIN'S RUSSIA, by Nina Lugovskaya (Houghton Mifflin 2007). In 1932, in the heart of Stalinist Russia, thirteen year old Nina Lugovskaya began writing her diary. It covers everything you'd expect: stories of her friends, crushes, siblings. And experiences with the police state that sent her father to prison camp.

The diary was seized by the NKVD (forerunner to the KGB) when Nina herself was arrested at 18 and used as proof of Nina's anti-Soviet sentiments. The volume(s) was uncovered after the fall of the Soviet Union in the KGB archives.

I WANT TO LIVE is a chilling account of life in a totalitarian state. Particularly intriguing are the passages marked by the State as indicative of anti-Soviet thoughts. At once terrifyig and compelling, I WANT TO LIVE offers a searing portrait of the girl, the place, and the period.
Posted by Greg Leitich Smith at 7:03 AM